Today we visited sand dams to learn how they work and the progress in building them. There are several sand dam projects in Kyua Sublocation, the same area as the Kisesini Clinic. Earlier this year, GHP provided funds to Chief Peter Kavulo to repair and improve the dirt roads to Kisesini Dispensary. The Chief met us in Kisesini. As we drove toward Kyua Market, he pointed out work that the County had done on the road. There was a heavy rain in March that washed out parts of the road into Kisesini. They shored up the edges of the road with bags filled with gravel and dug trenches to let the water drain away from the road. The main road into the clinic is now much easier to drive but longer-about 12K from the tarmac road.

We drove a short distance outside of Kyua (pronounced chew-ah the nearest town) and followed a road until we reached a dry stream bed.We stopped and walked a quarter of a mile until we saw what seemed a mirage. There was pond surrouned by banana trees and along the shore tomatos and maize. The water impounded by the sand dam supports drinking, animal and crop use. Four villages collaborated in building a series of dams that catch stream water when it rains. Several dams about a kilometer apart gradually fill up with water and sand. Excess water flows over the dam and is caught by the next dam. Even though a dam is filled with sand, the sand holds water that in theorys can be collected by digging down until water is reached. 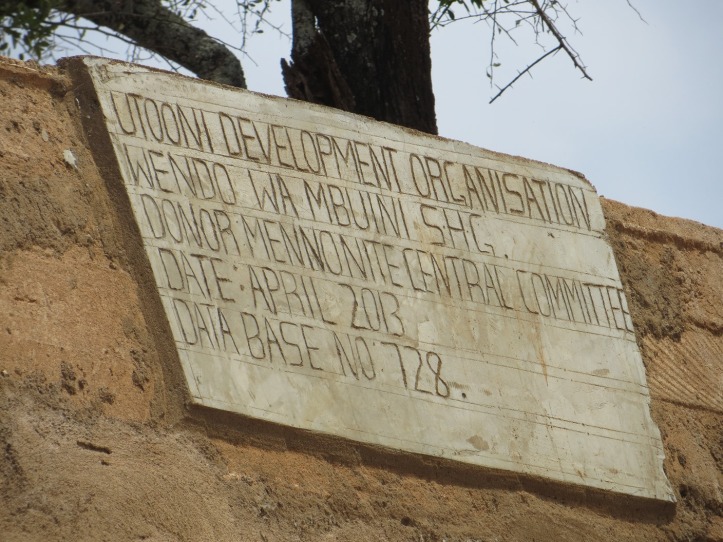 The dams are built of concrete and anchored into bedrock. Each takes 300-600 sacks of concrete and a lot of labor. The project is supported by Utooni Development, a community based organization based in Makuini District south of Kisesini. The villages and members provide labor in return for eventual access to the water. Late in the afternoon, we visited a series of dams close to Kisesini. We followed the stream and saw 5 of 6 dams built since 2009. The dams were filled with sand, but none of them had water and there was little evidence of water being harvested from the sand that had filled the dams. This led us to question the concept. Does this mean that the water from the last rain has already been used or is the water too deep to reach? If the water is in the sand, it isn’t very accesible for irrigation. GHP will continue investigate this approach to providing water in this arid region. At this point we are still uncertain whether sand dams will scontribute to our strategies for improving the health of the communities by addressing nutrition and agriculture.