CHW Salinas assessing a newborn during a home visit 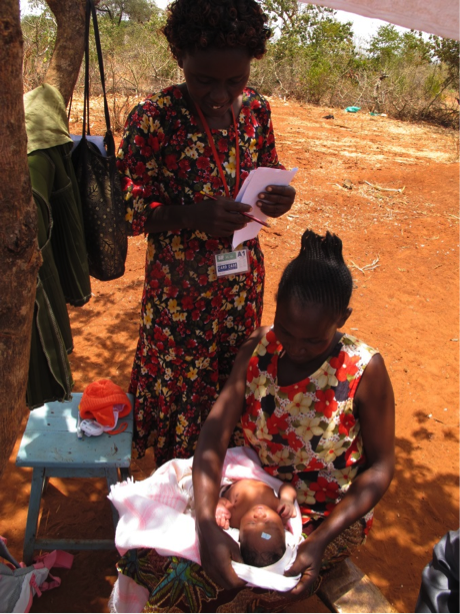 An infection recognized early can save a newborn’s life
After a long walk to the home of a mother and her newborn infant, Salinas promptly began her assessment of the infant. Salinas is a volunteer community health worker (CHW) who has more than two years of experience with newborn home visits, having participated in the first training program that was implemented by Global Health Partnerships. The infant that she is visiting today in a village of Makusya sublocation was born three days ago without complications or problems. When Salinas checked on the baby the first day after birth, all was going well and there were no signs of illness or problems. On today’s visit Salinas starts by greeting the mother, asking if breast feeding is going well and if the mother has any concerns or has noticed any problems. She notes that the baby seems alert and active, has no skin pustules or boils, and her temperature is normal. But when Salinas counts the breathing rate, she finds a rapid rate of more than 60 breaths per minute. Recognizing this danger sign of serious illness, she calls her supervisor Nicholas Mutuku, who quickly arranges for the mom and baby to be transported to the Kisesini clinic. Nicholas confirms the diagnosis of pneumonia, promptly starts antibiotic therapy, and arranges hospitalization of the infant. A few days later the young infant has recovered and is back at home with her mother.

In Kenya 40% of childhood deaths occur during the neonatal period (the first month of life), and three- fourths of those neonatal deaths happen in the first seven days. Young infants can become very ill and succumb to their illness quickly. The key to reducing the death rate is early recognition and prompt treatment. Over the past three months Salinas and the other 19 CHWs visited a total 198 infants during their first week of life. The visits were conducted on days one, three, and seven of that first week, as recommended by UNICEF. There were no deaths. In the absence of the newborn home visitation program, 4 or 5 of those 198 young infants would likely have died, based on the national neonatal mortality rate in Kenya. The dedicated CHWs of the Kisesini Community Health Project have accomplished this successful effort because of your donations to this GlobalGiving project. If adequate funding can be found, GHP is planning an expansion of the project so that a larger number of newborn infants can be included.